Leonardo da Vinci was a man of many talents. He was a painter, inventor, engineer, mathematician, philosopher and much more. His name is shrouded in legends and his influence on future generations cannot be denied even by the biggest skeptics out there. Even if you are a fan of his life and work, you might be surprised to find out how many fields of science, technology and life he had actually influenced by his work. Let’s start with:

Many people do not know that, but Leonardo was among the first paleontologists out there. He may very well be the first person in written history to have discovered a very rare fossil which is called by the scientists Paleodictyon. The fossil has a hexagonal shape and even today researchers are baffled by the reason for the fossil to look that way. Leonardo’s journals show us that he was probably the first European to express interest in paleontology and he has even studied in depth the behavioral traces of plants and animals, thus becoming the founder of the ichnology.

Now it is a well known fact that the basic principles of robotics were laid down by science-fiction authors in the beginning and middle of the 20th century, like Isaac Asimov. It was in the 15th century however when the designs of the first humanoid robot were made. Yes, you have guessed right – it was Leonardo who did it. Even though, like most of his inventions, the robot remained described only on paper, it was in 2009 when an Italian designer actually followed the plans that have survived thus creating a 6-foot robot, which mechanics actually allowed it to walk, move its head etc.

A journal entry by Leonardo, dating to the 1480s describes the basic principles of modern flight safety equipment the following way: ““If a man is provided with a length of gummed linen cloth with a length of 12 yards on each side and 12 yards high, he can jump from any great height whatsoever without injury.” Following the Italian descriptions, a couple of years ago Leonardo’s parachute was tested via a jump from a hot-air balloon – and it worked quite well. 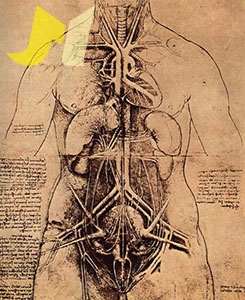 Books, articles and documentaries about Leonardo’s life and achievements usually tell the story about how he was able to describe the principles of the first telescope, even though, as it often happens, he was not able to build one himself due to lack of time and commitment. On the other hand, it is often skipped to mention that when it comes to optics, he came up with the idea of contact lenses. He noticed that sticking one’s face in a bowl of water helped clear the vision. He speculated that water-filled lenses might improve the eye-sight, but the idea, drafted in 1508, was too risky to be viable trying to create a prototype. However, the 19th century scientists who created the first contact lenses in history were actually inspired by Leonardo.

Scuba Diving has become one of the best-loved water sports around the world. It is a well known fact that Jacques Cousteau was the father of the underwater breathing apparatus, but in the 16th century Leonardo was already thinking about creating a scuba diving breathing apparatus too. He was imagining a leather bag to hold the air that the diver would be breathing, which is surprisingly close to the actual invention. Naturally, the air-compressors that were to make more air available – thus longer dive-time – were still centuries ahead.

It is no secret that human anatomy has been a long-standing interest of Leonardo’s. He was doing anatomical studies on dead bodies and mapping the internal organs in a precise and very meticulous manner. He was particularly interested in the way the heart works. It would have taken medicine a whole century to figure out the role that the heart was playing as a blood-pump for the body, but Leonardo managed to realize that it played an important role in the circulatory system. He was the first person to describe certain heart-diseases as well as to say that the heart is actually a muscle. Naturally, his studies were very helpful for the better understanding of the heart and influenced the development of heart-surgery procedures. 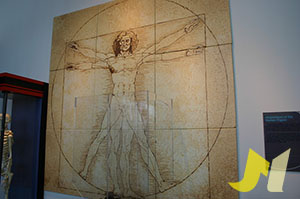 Even though Leonardo did not invent pop culture, nor was he dedicated to influencing it directly, like Andy Warhol was in the 1960s for example, his work, unique persona and the air of mystery that surrounds him made him a legend. One that persisted for centuries and still continues to attract the attention of the general public. His famous stretch – The Vitruvian Man – is probably the best known and most easily recognizable drawing in human history. Naturally, everyone knows about the Mona Lisa. Millions of T-Shirts, mugs and reproductions depicting his life, work or face are produced every year, making Leonardo da Vinci a permanent fixture and an influential figure in modern day pop culture.

Leonardo’s most enduring works are his painting and drawings. Four of them are particularly well known and hailed as the highest instances of art in the age of the Italian Renaissance. They are heavily referenced in popular culture too.