The gentle clink-clink of glass bottles and the humming of an electric milk float will be quite familiar sounds to many people in Britain. These are indeed the familiar sounds of the milkman – one of the iconic members of British society. Some twenty five years ago, many households still got their milk delivered daily to their doorstep. Unfortunately though, in the last quarter of a century, daily milk deliveries to Britain’s homes have dropped dramatically. 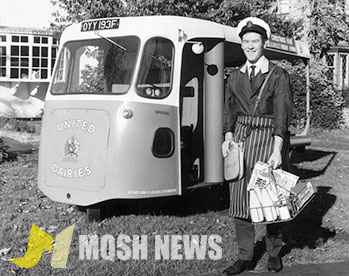 Although the number of homes and establishments using daily fresh milk delivery service has dropped dramatically, the milkman shouldn’t be written off just yet. Delivering milk on a daily basis is more than just a delivery service. In many cases, the milkman is the difference between life and death. For instance, one milkman who had been doing delivery for thirty five odd years, knew more than well the habits and daily routine of most of his customers, one day an elderly lady who always came out to greet him in the morning did not come to the door, the milkman knocked on the door, which happened to be unlocked, he peeked inside and saw the old lady passed out on the floor. He called paramedics immediately and they were able to save her life, thanks to his knock on the door. See, a milkman is more than just a delivery person. Many people call for help on the milkman with moving heavy items, or other odd jobs around the house. It’s just the extra pair of friendly hands that makes the difference. These are just a couple of the reasons why the milkman might tell you ‘leave a note in the empty bottle saying milkman please knock’.

Indeed, milk deliveries and the milkman service is not what it used to be, but there is a core of loyalists who are certain than the few pounds extra paid a week for a proper milk delivery service is money well spent. An East London dairy milk producer says they have seen an increase in customers over the last five years, and his operation has a solid twelve thousand customers a week. The hipsters are the ones driving the daily milk delivery service these days, the people who are into eco living, the ones who like the glass bottles, the electric milk float, and like to support their local businesses. The dairy farm owner goes on to say that people prefer the personal touch of the daily milk delivery, especially older individuals and those who feel vulnerable due to one reason or another. Indeed, having your fresh milk delivered daily by a dedicated person definitely beats going to the supermarket. There are instances where the only human contact for some customers would be the milkman delivering two or three times a week. Not just a job.