Forty years ago, when Great Britain was voting in its first ever European Economic Community Referendum, things were very different – issues like the Brexit were non-existent, the political and social climate were different, the country itself was different. The referendum held back then was to pledge support and allegiance to the European Community, and to make the United Kingdom part of the European Common Market. In the seventies, business and society as a whole were willing to give the scheme a go, and become more involved with the European community in both economic and social terms. Great Britain enthusiastically entered the European Economic Community in nineteen seventy three. Two years later the business sector once again pressed managers, workers and consumers to vote ‘yes’ and stay within the European economy. 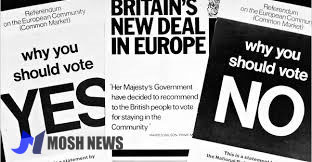 Back in the mid-seventies, things were quite different, yet there are a number of common parallels between then and now, twenty sixteen. Overall, the current situation itself may appear quite familiar to experts, though there are certain ‘mirrored’ aspects. Then Labour leader Harold Wilson, pushed for renegotiation of Great Britain’s membership terms in the EEC if elected. He did get elected, and put the proposed changes in a referendum for the people to decide upon. In doing so, he upset certain members of the former Conservative government who felt they ‘were lured into a common market miracle, which was to prove nothing but a mirage’. At the same time, business and industry thought differently – CBI or Confederation of British Industry held a meeting and allowed for its twelve thousand members to vote and found out that only eight members wanted out of the European Economic Community. 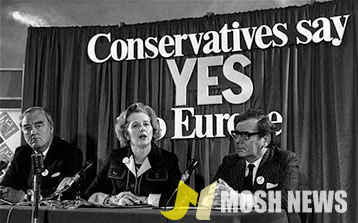 CBI put its weight behind the campaign for Britain to stay in the EEC which gave it a massive momentum, and as expected gave the necessary result – Great Britain continued its membership in the EEC. Most of the United Kingdom’s commercial giants like IBM, ICI, Ford, Rolls Royce, WH Smith, Rio Tinto, Imperial Tobacco and British Steel supported the deal and kept the campaign going at the right pace. The advantages of keeping as part of the EEC, were not only good for companies themselves but also for their employees, their employees’ families, retired company employees, company shareholders etc. Many other national organisations joined large industrialists on the frontline in the bid for retaining EEC membership, such as the Farmers Union. The funding power of large corporations was overwhelming, the campaign funds provided by Sainsbury’s and BP alone were three times the budget of the entire NO EEC campaign. The amassing of the commercial sector under the ‘Yes’ flags was something never before seen in British history. 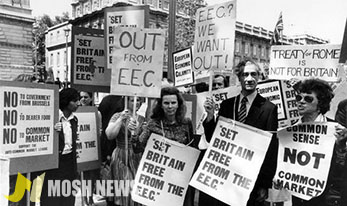 Another important aspect of the pro-EEC campaign was the large support it got from British workforce. Large employers were actively involving their staff in the campaign, and were even choosing a so called Mr Europe – a designated member of staff who was authorised to receive weekly or monthly materials on how the joining process was coming along, and also to stress the benefits of Great Britain, and the given firm in particular would enjoy by being part of the EEC. Some companies even commissioned EEC articles and educational video tapes to be presented to staff in order to better understand why the joining is beneficial.

Today things have changed indeed. With only one third of FTSE listed companies showing support for Great Britain staying within the EU (although the remainder two thirds of organisations have remained silent on the issue) it is unclear which way things will go. Most questions are expected to be answered by the end of twenty sixteen.